In rapid-fire succession, Karl Lagerfeld sent out 90-plus looks for Chanel's "front row only". 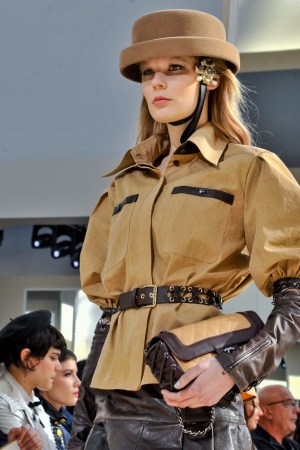 “The pearls are too modest.”

On take two, Karl Lagerfeld didn’t raise his voice exactly — he doesn’t. But during a fitting for his Chanel show on Tuesday, when he thought one of his models underaccessorized in his outsized strands, he wasn’t having it.

When a visitor noted during a preview that he’s recently played down some of the more obvious house accouterments (though never the house’s crystal-clear image), Lagerfeld waved off the thought as yesterday’s news. “I use them now in oversize and overvolume. I use them in scarves and things like that — jackets and coats, and things like this.”

Lagerfeld’s deft manipulation of the house codes — “things like this” — to suit his mood du jour is nothing short of remarkable. For fall, he worked a particular alchemy, amping up the signature regalia — pearls, boaters, camellias (in giant prints, if not 3-D blooms) — in the interests of chic modernity.

On the back-to-the-future front, after a series of sets that got bigger and more over-the-top with each season (Chanel Supermarket; Chanel Airlines), this time, the invitation implied a trope of old-time couture. “Front row only,” it read, the line scripted atop Lagerfeld’s illustration of a classic gold ballroom chair.

Yet intimacy doesn’t work in the Grand Palais. Rather, this front row was more on the scale of a football field, but bigger, arranged in a precision grid of multiple rows, each with a bird’s-eye view. It made for interesting viewing even before the first looks came out. At every Chanel show, a good portion of the seats go to consumers — not the hoi polloi who get their entertainment fixes from high fashion and their wardrobe fixes from fast fashion — but real, credit-card wielding clients. The egalitarian seating gave the industry audience the chance to see a microcosm of that clientele — multigenerational, from women approaching grand-dame status to some who looked 20-something. They all worked Chanel their way, decked to the Chanel nines.

Whatever their age, they took in a show that spoke to them, the looks coming furiously from two directions — left, right, left, right, left! — fast enough to bring on fashion whiplash. And what a happy malady it was. There were suits galore, the dominant silhouette lean and to the knee, with skirts zipped up the sides, or unzipped to reveal contrasting tweed linings. These came in countless variations, and looked newest in vibrant pinks and berries. A sportswear attitude surfaced in sweaters decorated with grommets over metallic skirts, and a shrunken jean jacket over camellia-print pants. As for practicality, Chanel trenchcoat, anyone? And, yes, Choupette, her portrait turned into the stuff of skirts and big, functional totes. For the ingenue with a party to go to, Lagerfeld offered angelic white tiers in short and long versions over black tights. And there were the extras — hats held in place with chinstraps fastened with big jewelry buckles; long, thick knitted gloves; emoji pins; iPhone breast pockets, and those pearls galore — all piled on in glorious excess.

Done as it was, it radiated tony practicality and Lagerfeld-style, so much so that it brought to mind that “w” concept — wardrobe dressing, but with focus and high style. Asked whether he’d considered that approach, Lagerfeld said, “I’m very down-to-earth.”