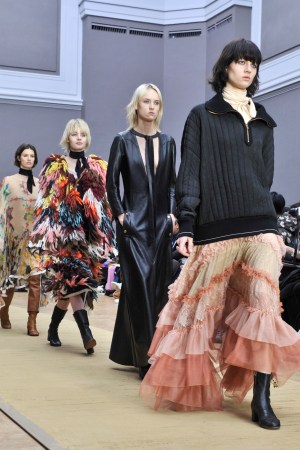 From comedic (Crosby and Hope) to counterculture cool (Kerouac), the road trip has long captured the creative imagination. When Chloé’s Clare Waight Keller read up on such a trip featuring a young beauty on a bike, far off lands and a time of not-too-distant yore that fashion can’t get enough of — kismet! The motorcycle heroine, writer Anne-France Dautheville, traveled across the Middle East and parts of Africa in the early Seventies, recounting her escapades a few years later in a book memoir.

“She had this incredibly inspiring attitude, her sense of daring,” Waight Keller said backstage before her show on Thursday morning. “She was chic and boyish at the same time. I found something really charismatic about her.”

Not to mention plenty of fodder with which to rev up Chloé’s range while retaining the lovely boho bread-and-butter that Waight Keller delivers consistently and well. Anytime, anywhere, girl-bike-bravado adds up to a toughened-up attitude and an infusion of leather, and Waight Keller took a carpe diem approach. If once or twice she seized too much — a black, red and yellow head-to-toe biker-chick getup vroomed far afield from Chloé’s essence — more often, she assumed a biker-light stance, integrating motocross constructions and details with sound perspective. Leather with flou? It worked like a charm in any number of lovely blouses with poetic collars and sleeves that wafted atop various takes on the biker pants. She went more broadly sportif with popover shearlings and knits as well as a major poncho motif. No matter that giant squares of thick fabric flapping about the ankles might be counterintuitive to two-wheel travel; this is fashion, not a dirt road. The ponchos checked the Seventies and nomadic boxes, looking good along the way. In a similar vein, the biggest, loosest, longest Aran knit imaginable — a winner.

For all her boyish musings, Waight Keller never lost sight of who her girl is, and that she loves a pretty, fluid dress. Here, they came in collages of diaphanous fabrics in dusty shades worn over biker boots. Cut in challenging, out-to-there volumes, they made sartorial adventure of the pretty sort.