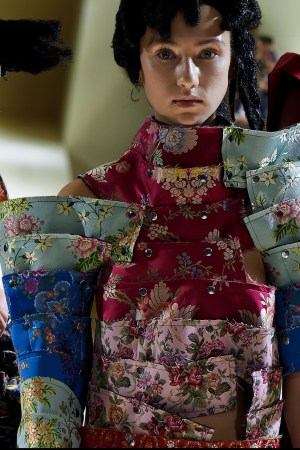 “Where have all the flowers gone?” lamented Peter, Paul and Mary many years ago. Stockpiled by Rei Kawakubo. She hoarded them to unleash in a Comme des Garçons collection that delivered giddy fancy and intrepid invention in a season previously lean on audacity.

Kawakubo is such an industry goddess that one aspect of her work gets short-shrift — the fun one. It’s OK for us to find amusement, joy even, in her deep thoughts. “18th-century punk” came the cerebral one’s terse briefing. What, you thought modern times had a lock on disaffected youth? Disciples of Kawakubo’s take on punk worked the mood with a girly side, one expressed in that lavish explosion of flora. But not just any flora. The designer used only haute fabrics from Lyon. (Except, of course, when she used bubble-gum pink vinyl.) She worked the grand fabrics into 17 typically complicated, out-there architectural assemblages, displaying complete lack of restraint with layering on the luxe. Conversely, she crafted each 3-D wonder with utter precision. Equal parts bold creator and exacting technician, Kawakubo places not a single petal, loop, or puffed-out doughnut pillow without careful consideration.

For all the blossoms big, small and ebulliently colorful, a warrior vibe ran throughout the stiffened flaps, bands and panels fastened together in tiers with big, utilitarian snaps. Articulated, armorlike casings looked like Mad Maxine in crusader mode. A girl can flash some flowers and attitude, too.

At the same time, she can express her penchant for pretty. Not ordinary, girl-next-door pretty, but pretty of a sort. Thus, the first model out walked with a ballerina’s gait, feet turned out, and toes pointed, and the soundtrack by Sven Kacirek featured snippets from “The Nutcracker” on what sounded like a xylophone. As for the shoes, not ballet slippers exactly, but close: faux Keds in pink and white, covered with tufts of fake fur. Move over, Balanchine. Kawakubo’s Waltz of the Flowers pirouetted with a strange, compelling power.