Sébastien Meyer and Arnaud Vaillant’s second runway show for Courrèges had the flavor of a mini Apple-product launch. 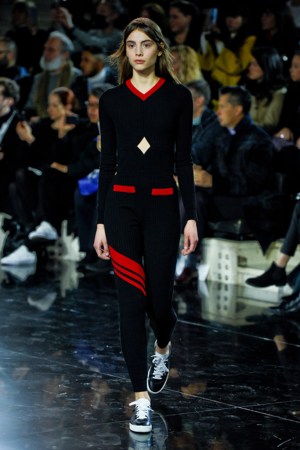 The marketing-driven approach that Jacques Bungert and Frédéric Torloting, the former Young & Rubicam executives who bought Courrèges in 2011, have taken to reviving the brand has the industry’s attention. There was major retail and editorial representation at artistic directors Sébastien Meyer and Arnaud Vaillant’s second runway show, which had the flavor of a mini Apple-product launch. Show notes spoke in the simplistically friendly directives of tech advertisements: “Make it new. Make it warm. Make it practical.” It went on. “If each day technology gives us miracles in our hands, can’t it do anything for our shoulders? Why not imagine smart garments?”

Meyer and Vaillant answered those questions with a series of tailored coats designed with a small battery that can be charged with an iPhone charger. At the press of a button, the shoulders, back and pockets get warm. iCoats, if you will. “We’re going to try to focus on technology even if we’re not in Silicon Valley,” said Vaillant backstage. They’re close to Cupertino in strategy if not geography, which isn’t bad positioning for a brand with an image hinged on futurism. Technology is the future, even as its intersection with fashion is still being hashed out.

The same as last season, most of the collection was shown as a procession of single garments — one skirt, jacket, shift or knit body suit per model — paired back to a plain black or white ribbed top, except for new suiting, which by definition requires two pieces. The straightforward messaging charmed as it commodified classic Courrèges moto jackets in shiny brights; updates on lacquered shifts made of curved panels that formed a diamond cutout under the bust. The more designed pieces included pants with a trompe l’oeil unbuttoned fly; suits, which followed the retro-ish tailoring protocol Nicolas Ghesquière popularized at Balenciaga and pop-colored tailored coats intersected with sheer, gridlike lines, a blueprint for folding the coat into a neat square.

Is this the future? Who knows, but quick fix items are definitely the now, as in see-now-buy-now. Meyer and Vaillant’s show notes also promised that a third of the collection would be available immediately. The copy read like a script for a commercial voiceover: “We aren’t talking about ready-to-wear, but ready-to-live.”