The designer staged an eye-catching debut via a bold, artisanal approach to fashion. 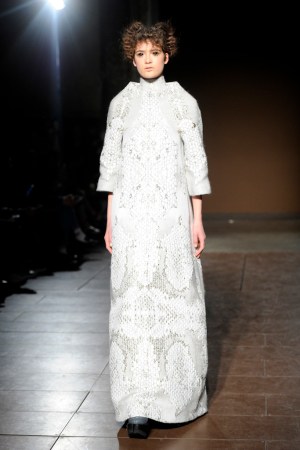 It was Esther Dorhout Mees’ seventh collection but her first in Paris. The Dutch designer said she moved to the French capital because she thought the city was a good match for her bold, artisanal approach to fashion. And she was right.

The newcomer’s fall lineup was an interesting exercise in conceptual design and couture dressing. With birds as the theme, Mees constructed a series of organically shaped pieces imitating bird-in-flight formations, which intrigued on a leather dress with a thick, 3-D knitted pattern that looked as if a flock of starlings had just swarmed the garment. Many silhouettes featured armorlike upper portions — the most fearless of which was spotted on a crop top with gargantuan shoulders knitted to resemble a fly’s compound eyes, much like the models, who wore giant, pitch-black contact lenses, feeding into the collection’s dark, animalistic air.

The artful fabric treatments stood out the most. Mees weaved a jacquard from six different yarns, including felt and cashmere and, with a heat process, created a unique, three-dimensional surface evoking images of animal skin or honeycomb. Or both for that matter, which she also reprinted on more day-friendly silk and satin dresses.

This was a notable Paris debut, though it remains to be seen how Mees will channel her couture vein into ready-to-wear.