Dries Van Noten showed a collection inspired by the high-style decadence of the Marchesa Casati and her lover (one of them, anyway), the writer Gabriele d'Annunzio. 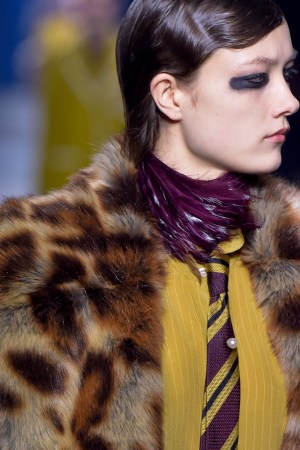 Gender fluidity — hardly a new topic, and one that has long fascinated the creative psyche. George Sand and Oscar Wilde were high-profile sartorial participants back-when. Generations later, Yves Saint Laurent and Helmut Newton made women in men’s clothing provocateurs of high chic. Today, gender is one of life’s many spectra — no rules, no judgments.

It resonates, then, when a collection rooted in good old-fashioned cross-dressing captivates its audience. But as they say, it’s not the inspiration; it’s what you do with it. Dries Van Noten has long been intrigued by the yin-yang balance that makes us interesting as people and, given the right circumstances (said circumstances involving deft application of ingenuity, careful consideration and superior talent) can rock a runway.

For fall, Van Noten rocked it. Under the guise of homage to the Marchesa Casati — artist’s muse in her own time as well as sporadic inspiration to Van Noten’s generation of fashion designers, and one of her numerous paramours, Gabriele d’Annunzio, the writer and collector of fabulous pajamas — the designer struck an elegant, authoritative balance between his-and-her dressing for her.

Van Noten was attracted, he said, “by the passion of, on one side, the woman who wants to be a living work of art” – she’d have made one heck of a street-style star – “and on the other side, the poet who wanted to make decadence a lifestyle.”

Van Noten never let his arty decadence run amok. Rather, he controlled it as feverishly as the models’ mannish slicked-down hair, a beauty trope which, combined with their kohl-encircled eyes, evoked a time when expressions of non-conformist sensuality were fraught with danger. The collection conveyed, if not that faded reality, then a stylized interpretation of its implicit tension.

It started with leopard, a favorite of the Marchesa, whose lifespan exceeded her assets. (She was buried in a spotted reminder of her former glory.) Van Noten showed leopard as pants, jackets and overcoats, including a trove of fake furs (nary a real one in sight). The spots came in literal prints, oversized abstractions and as a cutout, embroidered overlay on a skirt and dress. Throughout, the fabrics were grand and the proportions grander, the decadence unfolding in the sweep of a robe and volume of a pair of fluid, striped trousers. Sometimes, the volume was best expressed via contrast: A small jacket over a white crested vest and fluid leopard trousers opened the show. The crossover continued with versions of that one-time designator of the leisure life, the crested club blazer with contrast piping.

Still, the Marchesa loved a feminine flourish. A “broken pearl” motif in a purple metallic jacquard and as a sweater embroidery referenced her penchant for wearing and destroying endless beaded strands.

Indulgent, yes. But hardly her most excessive wardrobe extra. “She wore live snakes as jewels,” Van Noten said. Surely an overstatement, one he translated into slithering embroideries on a dark evening gown. Dangerously seductive.