The collection's suave side came in a series of softly undulating dresses, worn over translucent mesh tops delicately hugging the body. 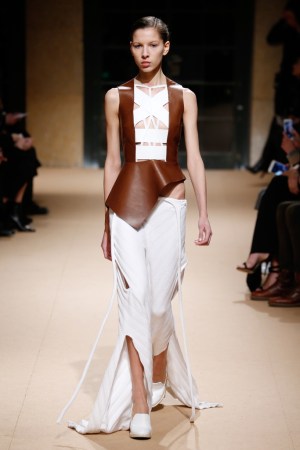 There were influences as different as bondage and Nineties hip-hop culture visible in Esteban Cortazar’s fall effort. They were linked by the designer’s desire to explore both freedom and restriction through construction.

Some of the pieces, including ultradramatic, armorlike outerwear, stopped just short of conceptual. One jacket spilled over the model’s body with intricate folds that were studded along the hems, bonded around the wrists and belted with a piece of silver hardware. Elsewhere, massive Mongolian shoulder accents amped up the volume of double-breasted coats. A cutout lamb leather top with bondage corseting was directly taken from “the anatomy of a pommel horse — a personal reference from the Nineties,” as the designer explained backstage, while the collection’s color palette, including bright yellow, “Lil’ Kim-pink” (remember “Big Momma Thang”?) and silver, paid homage to “the lights and crazy nights spent at the KitKatclub in Berlin,” he said.

Not all was loud. The collection’s suave side came in a series of softly undulating dresses, worn over translucent mesh tops delicately hugging the body.

But the message overall: raw and raucous.