There was an elevated sense of discovery permeating this high-energy, high mash-up collection. 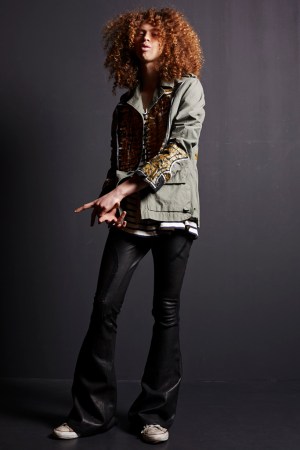 With a new generation of appropriated streetwear styles sweeping through fashion, Faith Connexion couldn’t be more on trend. But attention — this is not your go-to label for plain-Jane tank tops and drawstring bottoms. The French collective of former Balmain designers (Alexandre Allard, ex-Balmain shareholder, is the label’s founder) has developed an aesthetic of bold street staples mixed with art and couture elements, since it was relaunched in 2014.

For fall, the elusive design team (reportedly under the aegis of Christophe Decarnin) collaborated with two graffiti artists, Pisco Logik and Le H, who amped up its signature denim and Army parkas with fiery motifs and military ornaments: Cue Hussar cord knots and gold lace details hand-painted directly onto the garments.

Lace also upped a heavily oversized T-shirt assembled from black and white stripes of the ritzy fabric. Similar shapes were rendered in either tweed and feathers or denim and fleece bedecked with sequins — both to great visual effect. More bohemian were a series of floral-printed silk coats and blouses with extralarge bow ties, while pants — either baggy or bell-shaped — walked the line between contemporary street and Seventies disco. Throughout, there was an elevated sense of discovery permeating this high-energy, high mash-up collection.