Riccardo Tisci chose Egypt, the cradle of civilization, as his source for his fall Givenchy collection. 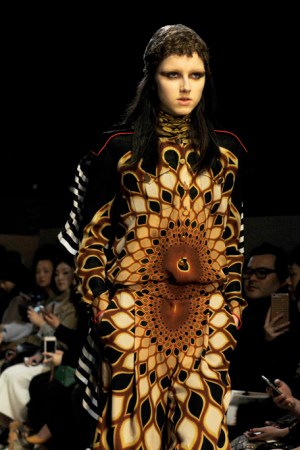 Eight millennia of rich history gave Riccardo Tisci ample material to work with for his fall Givenchy collection. “Egypt for me is like the beginning of everything, for writers, for food, for everything,” said Tisci backstage. “It’s been a long time that I’ve wanted to do this collection.”

It was a real collection. Remember that word? Unlike the ambiguous “wardrobe” buffet of clothes for every mood, this was a definitive fashion statement, a proposal of a potent look. Tailored military coats, vaguely Sixties dresses and knee-length, low-rider Bermuda shorts, all worn with skin-tight, knee-high boots in suede or python, worked in unison as a neo-bourgeois uniform of cool on the models. They wandered through a labyrinthine set, which probably had more impact from an aerial vantage point than from inside the maze, though it framed the show in the aura of a grand production.

Tisci’s psychedelic displays of Egyptian symbols, rendered as whirling mosaic prints and precise patchworks, provided the lineup’s main optic momentum. Short, shiftish dresses with turtlenecks and ruffled bibs came in hazy mirror-image prints featuring eye-and-falcon-wing motifs and giant eye and geode embellishments at the neck. More vivid mixes of red and green eyes, wings and graphic mosaics came in incredible leather patchwork on a boxy jacket over a leopard-print shirt and patchwork skirt. Break out the Rosetta Stone to decode the iconography, or simply enjoy the face value of the colors and complex pattern play.

Many of the looks were loaded with animalia — leopard-printed furs and python coats, cropped jackets and boots — intensifying the opulent exotica and indulging Tisci and the Egyptians’ shared obsession with animal motifs. But there was also much in the way of black commercial value: velvet and satin bomber jackets decorated with gold discs; black military coats with red-and-gold trim at the cuffs and gold buttons; a boxy black mink workwear jacket; a black velvet dress with fur-trimmed sleeves and a collar that dipped in the back was quite ladylike. For all their worship of gods and mysticism, the Egyptians created the first civilized society.