The designer tightened up his act for fall by focusing on neat and strict military tailoring, and a variety of sexy pants. 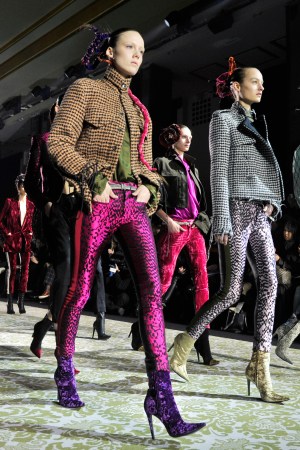 No one slips a garment off the shoulder quite like Haider Ackermann, one of fashion’s grand champions of dishabille. He tightened up his act considerably for fall by focusing on neat and strict military tailoring, and pants so tight you couldn’t hide a Tic Tac.

The combination was combustible. Consider a bustier in Army felt with a taut little matching jacket half-on, half-off, paired with second-skin tuxedo pants with fuchsia satin side stripes and killer pointy boots. The look was as smoldering as Joana Preiss on the throbbing soundtrack, breathlessly naming girls and imploring them to “come to me.”

Backstage, Ackermann insisted his pants were “graceful” rather than sexy. To be sure, he brought something new and sophisticated to the maligned world of cling: adding racy side stripes and sparkly front panels to leather biker leggings. He also employed gleaming brocades that played tricks with the light, somehow deflecting attention from the tightness, yet somehow rendering legs even more slender.

Pinned on these shiny appendages, it was easier to appreciate the fine and varied tailoring: Long and slender coats with epaulettes, sculpted peplum jackets, elongated boyfriend blazers, and cropped, wedge-shaped tuxedo jackets with strong shoulders.

While Ackermann’s name is often bandied about for any number of French couture houses, here you started to think of the Frenchman as a racier, artier version of Giorgio Armani, given his skill and range with pants and jackets.

Indeed, not everything that stalked his carpeted runway was for the cellulite-free. The designer carried over crushed velvet from his men’s collection, here carving it into loose lounge suits, trim dusters and quilted blousons. The T-shirt gown with a slit carved out on one side, however, called for one very toned gam.