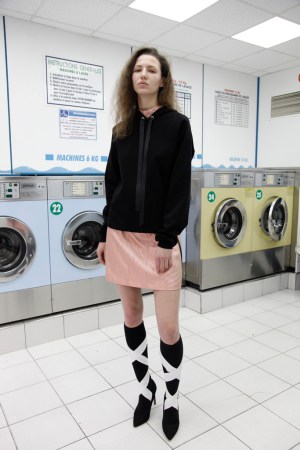 Andreas Huber and Raúl Egloff Alcaide, the Zurich-based duo behind Huber Egloff, had a globetrotting woman in mind for this fourth collection, which they presented in a run-down laundromat.

Their eclectic range, inspired by Albert Kahn’s “The Archives of the Planet,” had something of the mismatched nature of a traveler’s wardrobe, but one that had definitely not been crumpled from the bottom of a backpack.

Huber and Egloff crafted pink Lurex stripes onto cotton chintz tuxedo pants with a quirky feel, but also offered up classic black pants, high-collared blouses and shirt dresses for more versatility. A white sweatshirt emblazoned with the word “Bleach” – in reference to Nirvana’s first studio album and the manga character of the same — was paired with a long black A-line skirt, while the pattern on a floral printed crêpe de chine dress was blurred as if it had been left out in the rain.