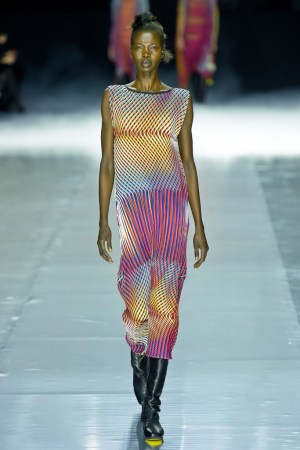 No stranger to complex show themes, Yoshiyuki Miyamae tackled no less a subject than deep space for his fall collection for Issey Miyake. The designer said his mission was to travel “beyond — to pursue as yet unseen and unknown beauty created from A Piece of Cloth.”

He was referring to the technology developed by the Japanese label to create clothing from a single piece of material using computer technology. Miyamae kicked off with a burst of color, with pleated garments that combined geometric lines with colored prints to kaleidoscopic effect.

Stripes and circles collided to form elaborate optical illusions. Other outfits were pleated at different angles to sprout 3-D forms, which appeared both organic and mathematical, like patterns found in nature.

This sculptural approach found its most dramatic expression in looks where the striped and pleated fabric was shaped into galactic whorls. These redefined the meaning of wearable technology, with the innovation springing from avant-garde fabric research rather than technical features.

The hypnotic creations were not for shrinking violets, but then, Miyake has always been a thinking women’s label. Let them boldly go where no woman has gone before.