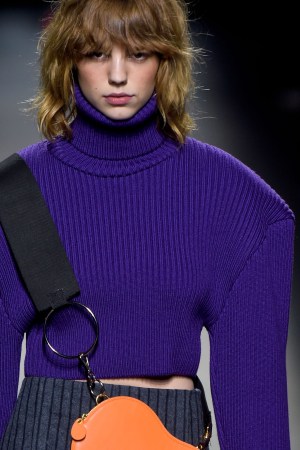 Simon Porte Jacquemus lives in an apartment full of round shapes — from tables to mirrors to furniture. “It’s a real obsession,” he confessed backstage.

The circle has become a symbol of his young Paris house, which attracted a Special Jury Prize in LVMH’s young designer contest last year. It’s a shape he slaps onto the front of short suede skirts and employs as shoe heels. (Imagine a hockey puck stuck to a ballerina.)

His intensive focus on naïve shapes yielded an intriguing and uncompromising fall collection, which gave perhaps even more airtime to the square. He opened his show with a pin-striped pantsuit nearly as big as the ones David Byrnes wore in his “Stop Making Sense” days.

The monster shoulders were repeated on striped shirts, velvet coats and cable-knit sweaters, helping cement supersize proportions as a key trend this European season. Their masculinity was tempered by quirky colors — from pale blue to intense purple — and, occasionally, thigh boots.

Other exits were freewheeling collages of incorporating one-shoulder tops, puffy sleeves and silvery disco dresses, one of the latter splayed across the front of a navy jumpsuit, as if plastered there by a strong wind.

Jacquemus said his runway clothes, while experimental, are what he actually sells, and he cited promising order taking, which he commenced in January to ensure early delivery. While bare-bones, his show in the Tuileries tent was made possible with the help of Valentino, Elie Saab, Carven and Issey Miyake, which were big enough to help shoulder some of the costs.