Despite some manga references, the collection was surprisingly down-to-earth, with silhouettes riffing off essential workwear dressing. 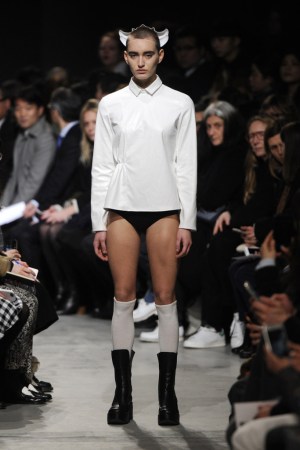 Julien David looked to his hero Grendizer, a popular manga character from the Seventies, for inspiration. Think this sounds too utopian for a ready-to-wear collection? Not so fast. “This guy’s planet is under attack,” explained David, “so he has to flee. He lands on earth — he basically crashes his robot [the Grendizer] in Japan — and ends up saving the world, which I think is very nice of him,” the designer noted, adding: “Because we all need superheroes right now.” No kidding.

Despite the obvious comic references, David’s fall effort was surprisingly down-to-earth, with silhouettes riffing off essential workwear dressing. There were spongy denim smocks and nylon-twill shirt jackets, which had transitioned from his men’s wear collection presented in January. The bonded denim reappeared on stretch skirts decorated with soft 3-D patches, which also served as cushions on elbows and coat collars. There was a genuine Space-Age moment thanks to a series of aluminum coated looks, the coolest of which was a loosely cut trench made of pleather with a pelt lining. And as for the Grendizer and his adventures, which David printed all over a pajama suit (too precious to keep in the bedroom) and a cotton jersey car coat, among others: They might just as well be on their way to becoming collector’s items.