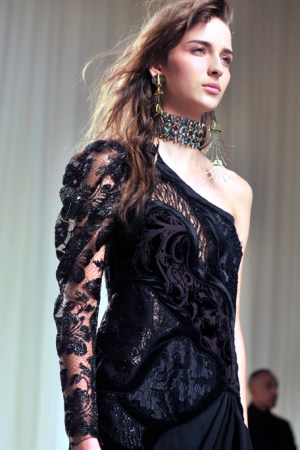 The placeholder collection. Being charged with its execution is one of the toughest assignments in fashion. Typically, the mandate is to advance the status quo enough to make current customers want to buy something, while making very clear that this is indeed the status quo, lest too jarring a shift confuse them. Generating real fashion news will be left to the person who ultimately gets the job. Yet whether overtly or otherwise, the designer or team in place for the short-term performs in audition mode; what understudy doesn’t want to blow the fallen headliner out of the water? In an unusual season, by midafternoon on Friday we will have seen two such efforts, at Lanvin and Dior.

The first occurred on Thursday evening at Lanvin, for the house’s first post-Alber Elbaz runway collection. Amid rumors of squabbling, Chemena Kamali and Lucio Finale, recently installed to oversee women’s ready-to-wear and accessories, respectively, struggled to fulfill the apparent mandate. They worked the dressed-up bourgeois end of Lanvin’s range with a decidedly Eighties current. While one could spot Alber-isms here or there, in the puff of a shoulder or the flip of a godet skirt, they avoided direct homage like the plague. For the clothes, Kamali went her way, which was many ways, with a few themes noteworthy in repetition: lace blouses and dresses, some quite lovely, that carried through on pre-fall’s New Romantics motif, only now less audacious and more madame; dense fabric mixes with an emphasis on jacquards; a floaty, natural-waist silhouette shown as both unconstructed peplum and dress. With this and some other silhouettes, you couldn’t always tell if they were cut for ease or just ill-fitting.

Along the way, Kamali roamed into far-flung areas, from white bandleader tuxedo to bustier-with-tailoring turf. Similarly, Finale’s shoes ranged from highly embellished stilettos to flat boots worn with evening gowns. In the end, it all read as an assortment of clothes, some appealing, some awkward, many serviceable, but not as a coherent, decisive statement such as used to be the point of a runway show. That’s not the designers’ fault. It wasn’t their place to deliver a major message. But then, perhaps, their place shouldn’t have been on the runway, either, at least not right now.