Trousers in myriad iterations were the focus of Christophe Lemaire and Sarah-Linh Tran’s fall collection. 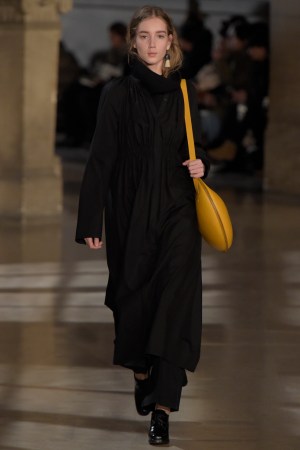 Who’s wearing the pants? Most everyone, in the case of Christophe Lemaire and Sarah-Linh Tran’s fall show for Lemaire.

Trousers in myriad iterations were the focus of the collection, with models adopting the insouciant attitude of the flâneur, that quintessentially French concept which refers to the art of strolling. This included casting their gaze this way and that, thereby breaking the cardinal rule of staring at the runway photographers.

The duo debuted a retro style in black, saffron or scarlet felt that was seamed at the front and back and lined in satin for a smooth fit. It came paired with waffle-weave sweaters for a look that channeled Seventies-era Ali MacGraw.

Another design, featuring a curved outer seam, was offered in a variety of fabrics, from crisp white cotton to black velvet and indigo denim. Mannish blazers and handsome overcoats gave the outfits a masculine swagger, softened occasionally by a petal-like ruffled collar.

The lineup signaled a shift toward a more pragmatic approach from the designers, who this week will launch their second and final collaboration with Japanese high-street retailer Uniqlo.

“This is still a girl who is very rooted in reality, who is practical, independent, strong and progressive, but who has a lot of imagination, who is curious intellectually, who loves literature, cinema and art, and therefore likes to spin her own stories,” Lemaire said backstage. “It’s like she is her own heroine.”