The collection was at its best when it played with subtle details, balancing the house's often overwhelming prints. 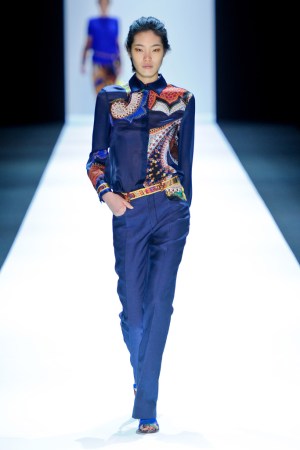 It was back to square one for Leonard following the departure of creative director Yiqing Yin in December (Yin was the third designer at the house since Véronique Leroy left in 2011 after eight years at the helm). A clean slate can sometimes be a reinvigorating experience, but the absence of Yin’s signature draped silhouettes was felt. They had given a cool, three-dimensional presence to Leonard’s loud, archival prints, but even this season’s most graceful of patterns, which for fall included Indian flower motifs, appeared flat.

The collection had good moments, mostly when it played with subtle details — a tone-on-tone paisley print appeared quietly on a midnight blue velvet trouser, while a see-through Western-style blouse unfolded softly through a boldly colored bow tie. A good idea: to counterbalance overwhelming sets of prints with delicate tone-on-tone embroideries.

But as the flurry of looks went from masculine Western shirts to bohemian tunic tops and from kimono-sleeved wrap dresses to a jumpsuit, they seemed to serve as essentially a canvas for the company prints, as Leonard looks to inject some youth into its mature aesthetic.