Nicolas Ghesquière showed a Louis Vuitton collection in which he continued his wardrobe approach to the runway. 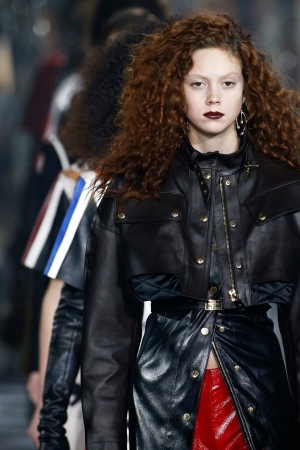 It seems that it’s all coming home to roost. The runway wearability obsession. The big-gun power flexes. Shows staged for the cyber audience. Most importantly, the relentless quest for cool and street cred. At fashion’s pinnacle, that one’s becoming embarrassing; as Mame said to Vera, “you try to be Peg ’O My Heart when you’re Lady Macbeth.”

It’s playing out all across fashion, even infiltrating Paris, once the hallowed sanctuary de la mode where everyone couldn’t wait to de-plane after working through the more overtly commercial priorities of New York and Milan.

At Louis Vuitton, it manifested in a peculiar fall collection. Nicolas Ghesquière has yet to create a memorable ready-to-wear identity for Vuitton. The program notes referenced “a captivating adventure…unearthing the glorious vestiges of a visionary trunk-maker and recasting yesterday’s creations for today’s tastes.” OK, but a trunk and a dress are different species. And Vuitton-isms weren’t the most obvious references, anyway.

Backstage post-show, Ghesquière focused again on the wardrobe aspect with which he launched his Vuitton tenure. “I’m not pretending to do a big statement,” he said. “I try to reflect how women dress today… the mix…all the athletic things, sports, the luxury, the innovation.” Of course, there were some impressive clothes. For one, interesting athletic looks recalled a Balenciaga collection that ignited the ongoing luxury sweatshirt phenomenon. In addition, he showed strong coats and closed the show with some lovely decorative dresses.

For the most part, Ghesquière designed counter to traditional concepts of pretty. Unlike last season, nods to the futurism of his Balenciaga years looked more overwrought than chic. He also went back further, to his intern days at Gaultier, for short jackets and articulated knitwear. “I guess, yes, there is something,” he said of the connection. “There is also probably a French way of mixing. Jean Paul is a big part of that.”

There’s nothing wrong with homage; designers draw from those they admire all the time. But Ghesquière honed in on Gaultier’s intense surface decoration, which, along with some complicated cuts, fought with the real-women-real-wardrobe premise. The main issue, however, is that that premise is starting to look like a substitute for a more specific vision.