At Maison Margiela, John Galliano showed a collection that unified elements of different worlds in a compelling, kinetic whole. 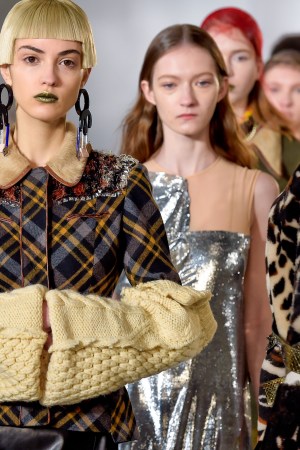 “Disparate worlds align in a single silhouette…traditional order is disturbed,” read the notes for the Maison Margiela show John Galliano presented on Wednesday morning. A premise not new from the designer. The collision and ultimate coexistence of different, often dissonant worlds has long been a hallmark of his craft. He finds beauty in the grand and the lowly, in polished and raw. Part of his particular brilliance lies in his ability to fuse their multiple contents into a compelling, kinetic whole.

Since arriving at Margiela, Galliano has shown increased affinity for doing so by the bright light of day. For fall it worked to powerful, chic effect. For all its daring, intricate assemblage and sometimes weirdness, his lineup offered a trove of beautiful clothes for real life, most plenty inventive but not beyond the sphere of runway-to-reality crossover.

One of Galliano’s big themes here, in fact, he’s carried throughout his career: the subversion of the militaristic with non-sequitorial elements, whether baroque, artisanal or irreverent. A “suit,” if that’s what you’d call it, featured a severely tailored sleeveless jacket cut from olive drab wool as befits the genre, its waist cinched tightly with a wide, demonstrative belt. But it was worn over a puff-sleeved iridescent peplum tunic over a gray striped knit dress with mismatched striped sleeves, half an olive ribbed overskirt and a soupçon of grunge. It looked at first interesting, and only after a moment did one take in the commercial message: Galliano was floating a new, cool approach to the structured jacket for day.

The controlled pilings continued, some complicated, some not. Pleated skirts anchored some of the simpler looks, one worn with a navy cabled sweater, the other a striped polo top and bomber jacket, albeit one bejeweled with giant multicolor stones, but a bomber nonetheless. Playful moments came in a cartoon mouse print on a dress and coat, and in Perspex brooches, three of which Galliano arranged on the back of a jacket in face formation — two eyes and a mouth.

An eerie serenity defined evening in a pair of shimmering, aurora borealis gowns — Lady of Shalott meets Morticia, each at the height of her wiles. They intrigued with irreverent elegance.