“Twin Peaks on Haribo" was the title Manish Aora gave to his Western-inspired fall show. 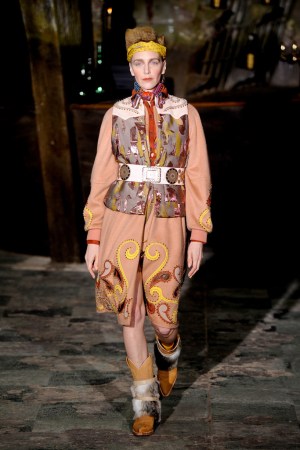 “Twin Peaks on Haribo” was the title Manish Arora gave to his Western-inspired fall show, which included runway cameos by Ellen von Unwerth, Chantal Thomass and Debra Shaw. If it wasn’t for the Indian designer’s signature fuchsia and a bonanza of zany prints, one could indeed think a cast from a David Lynch film was passing by.

Billowing prairie skirts in ethnic prints and embroideries were at the forefront of this spirited lineup, matched with Western throws and blankets, which were also rendered in African wax-print fabrics, underlying the season’s tribal flair. Denim, some treated beyond recognition via intense hand brushing and enzyme washing, was strong. This included a long, button-front skirt with pretty appliqués and thread work details.

The tongue-in-cheek designer also loaded his runway with eye-catching accessories, including a purple Pomeranian clutched under one model’s arm. The cowboy boots spelled rodeo but came with studded, fuchsia-colored leather bands and witty fur embellishments.

Prints had it all: Next to the handsome Native American ornaments, Arora slipped in some guns and roses, chicken legs and beer bottles, while some of the colorful bead work could have been mistaken for a bunch of jelly sweets spilled on the clothes.