Miuccia Prada showed her fall Miu Miu collection in a swanky, old-world living room of a set where perhaps residents weren’t living so large anymore, but, by golly, they were making the best of it. 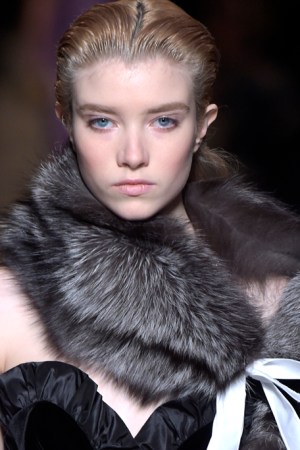 Miuccia Prada was in the mood for “fun,” she said backstage after her fall Miu Miu show. “It’s the end of the season.” From her lips to God’s ears. She closed Paris fashion week and the four-week, four-city grand tour with a house party, inviting a weary crowd into a swanky, old-world living room of a set where the dim lighting masked the fact that perhaps residents weren’t living so large anymore, but, by golly, they were making the best of it. “Nobility and misery,” said Prada. “Dressing is what’s left.”

The collection was delightful, a major dose of fashion that displayed Prada’s mastery of the unorthodox mix in assemblages that felt like a departure for Miu Miu — less ugly/pretty, more pretty fabulous. She fused the aura of Fifties Hollywood glamour with the teetering opulence of bankrupt aristocrats, proving that desperate times can be good times. Just ask Scarlett O’Hara about her unforgettable green velvet and gold tassel drapery dress, or Carol Burnett spoofing it: “I saw it in the window and I just couldn’t resist it.”

The women of Miu Miu did better than the drapes. They borrowed from the men of the house, wearing their shirts, boxer shorts, argyle cardigans and hunting jackets with extravagant fur coats and utility rain jackets reimagined in opera coat proportions. They went high-low, cutting elegant tailored jackets from the fabric of the plebes — denim. A rarity in a Miu Miu collection, the gentleman’s jean jackets and with elegant utility pockets, cut short, long and with tails, also stood out in an incredibly saturated denim market. Shrunken velvet workwear jackets had opulent fur cuffs, coats cut in Baroque upholstery brocades came with bejeweled trim, and maxiskirts were done in dense tapestry florals. Each look was customized with whatever was lying around: grandma’s pearls, grandpa’s pocket square; a collegiate patch that belonged to someone named “Gene”; bedroom slippers bedecked in the family jewels. It was dressing up as release, home entertainment and surely a new spin on homespun fashion.