There was nothing trans-seasonal about this charming show, with its snowy runway framed by video walls of Switzerland’s highest peaks. 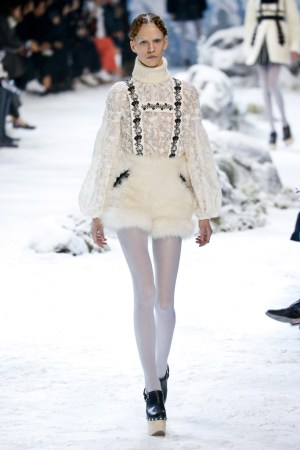 There was nothing trans-seasonal about Moncler Gamme Rouge’s fall show, with its snowy runway framed by video walls of Switzerland’s highest peaks.

And there was nothing subtle about the alpine theme, from the furry lederhosen that opened the display to the troupe of burly men from Fribourg that strolled out lugging giant cowbells, producing an impressive drone of peals. The clothes were sometimes silly — did we mention the furry lederhosen? —but mostly charming.

Even though there wasn’t a puffer jacket in sight, outerwear was the main event, including flaring car coats with furry sleeves; handsome redingotes with folkloric embroideries; and nifty sweater coats lined or trimmed with sheepskin. The colors — mostly cream with touches of red and icy blue — were beautiful.