David Koma added a trans-seasonal component to his fall collection. 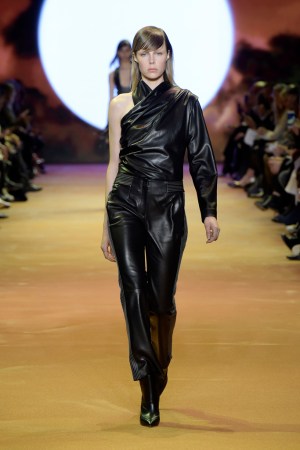 Add David Koma to the list of designers toying with in-season fashions. The artistic director at Mugler is not considering a switch in the show calendar, nor adding a “see-now-buy-now” component to his collection.

Koma simply took stock of the reality of fluctuating weather patterns and the needs of a Southern Hemisphere clientele, and concluded that his fall lineup should bear all the hallmarks of spring — down to the savannah sunset backdrop and a catwalk strewn with Ochre sand.

“I thought how this kind of seasonal aspect is shifting,” he explained backstage. “I was thinking it would be interesting to use much more softer and fluid materials in a part of the collection to balance the hardness of the other part. It was kind of something really new for me.”

The first few looks were familiar enough, though the designer took a more mellow approach to leather, contrasting corset-waist gladiator skirts with napa lambskin-draped tops. Embossed croc panels were used to cinch the waist of a sleeveless black minidress, or cut into strips that floated on red jersey.

But the real novelty came in a sequence of cream satin gowns with dipping hems that had a Thirties-inflected athletic chic. Koma excels at the slashed-down-to-there school of evening gowns, and to see him change register with such grace was an eye-opener.

The rest of his trans-seasonal experiments were not as successful. There was nothing wrong with the idea of adding bright colors, ethnic-inspired topstitching or oversize leopard patterns into the mix — just not all at once. Koma may be dreaming of warmer climes, but the city after dark seems to be his natural habitat.