Samuel Drira is quickly gaining a following with his quietly chic approach, anchored in enveloping yet minimalist silhouettes. 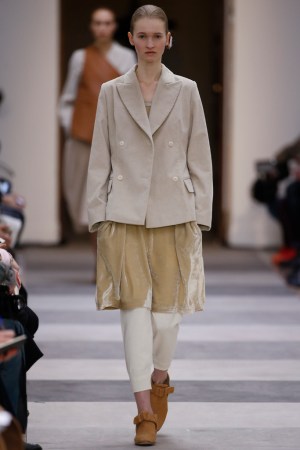 Indeed, his tone-on-tone separates — via clever layering and wrapping — add up to complete looks with a strong sense of purpose.

For fall, the designer sent out a bunch of urban nomads sporting roomy tunics in wool or crushed velvet, which he styled with lean silk dresses and cocoonlike coats. Capes strapped over a turtleneck sweater had large pockets in the back, as did some softly rounded Eighties blousons. Drira referred to the pieces as “wearable luggage” and said that the goal was to blur the silhouettes of a woman he had imagined “walking in the fog.”

The dreamy concept ultimately translated into a compelling and realistic proposal for fall.