This quiet collection, with a sexual pulse and an emotional tug, marked a step forward for designer Guillaume Henry. 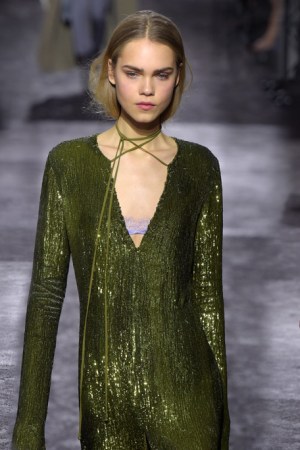 He can’t get enough of “crazy beautiful” Romy Schneider, who stared out from among images of fingers gripped tightly on a steering wheel, and sweat staining the underarms of a tight white blouse. He imagined a “femme amoureuse” — a woman in love, in English — dressing up for a date, her emotions a cocktail of passion and anxiety.

This was a subtle collection, but with a sexual pulse and an emotional tug — a step forward for Henry, now getting into the groove after three seasons at the house.

A variety of glossy textures — some bringing to mind the romantic, rain-slicked streets of Paris — paraded by on a plush gray carpet: narrow midi skirts in micro sequins; body-caressing dresses in panne velvets; iridescent organza T-shirts sheltering bra tops; loose trenchcoats in ponyskin, or taut ones in eel.

The sepia colors — along with combinations like lilac with Army green, or lapis lazuli with brown — were unusual and retro-tinged. There was also an old Hollywood quality to his big loden officer coat with a matching marabou boa; the secretary sweater with rows of sequins winking out from channels of mohair, and the slipdresses melding delicate lace and glossy silks. Boxy coats patching together fox fur and goat hair, dyed dark green or purple, were particularly striking.

Given his penchant for building a narrative with clothing, add Henry to the list of fashion designers most likely to costume a movie someday. But he’s adamant that’s not his intention. “At the end of the day, it’s not my story anymore. It’s about great clothes that hopefully people will want to wear.” And hopefully not only for nerve-wracking dates.