Kei Ninomiya's collection was all about optical illusions. 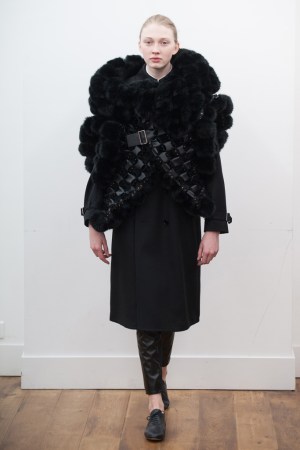 Kei Ninomiya’s fall collection for his Noir label was all about faking it.

The designer added faux fur to his repertoire, transforming the material into what appeared like a cape made of pom-poms or a braided jacket. The latter introduced a series of items executed with the same technique, including a parka, a bomber jacket and a duffle coat.

But what appeared at first to be a variation on macramé knotting (also displayed in one half of a LBD) turned out to be an optical illusion, created by the placement of strategic smocking to shape the surface of the fabric into a woven pattern. It was one of a series of sleights of hand employed by Ninomiya, a protégé of Comme des Garçon’s Rei Kawakubo.

The gleaming studs on a biker jacket turned out to be made of plastic. A deep pile fabric on a simple dress consisted of thousands of tiny strips of tulle. Those sly touches revealed the designer’s playful side, which can be obscured by his technical wizardry.

The trompe-l’oeil effects also carried over into more pared-down designs. A blazer featured tone-on-tone mimosas embroidered down one sleeve, while knee-length dresses came with detachable pleated aprons in men’s suiting fabrics. Call it a succession of brilliant disappearing tricks.