Virgil Abloh said the collection was inspired by a famous scene in "Pretty Woman." 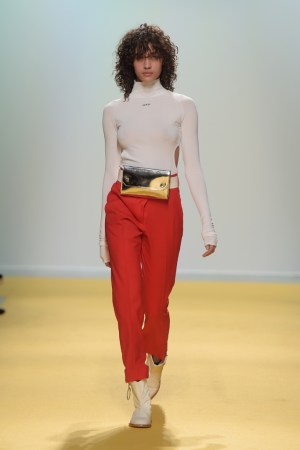 Regardless of what you think of Virgil Abloh’s design skills, as a commentator on the fashion system, he is endlessly entertaining.

Take the invitation for his Off-White show: A clear plastic envelope containing a still from “Pretty Woman” — specifically, the famous scene in which the snooty sales assistant tells Julia Roberts: “You’re obviously in the wrong place.” It was the starting point for his fall collection, the designer explained backstage.

“That scene in itself encapsulates outer perception of fashion and then real-person interjection. The whole point of the show is that that’s now the new landscape,” he said. “This girl is Julia Roberts. You know: She doesn’t need fashion, fashion needs her.”

Abloh specializes in such pithy aphorisms, even if the point sometimes gets lost when you’re looking at the actual clothes. But there is no doubt he has nailed a moment, as reworking wardrobe basics is the hot trend du jour.

Plain ribbed turtlenecks were printed with the word “Off” in tiny letters, while crop tops were patched together from old vintage T-shirts. The splicing idea continued with a silk slipdress featuring a pleated panel over one hip, or a canvas reproduction of a Giorgio de Chirico painting that was pleated into a bustier dress.

Jackets and coats were pulled off one shoulder and twisted around the body, while a vintage denim jacket was worn back to front. The overall effect was slick and cool.

Pointing to a red coat, Abloh noted: “That’s a normal coat. It could have been bought at a thrift shop, but the way she’s wearing it makes it look expensive. Expensive is the biggest buzzword. It’s the biggest new fashion slang. It’s like the word ‘lick.’ These words mean something now. The idea is not to spend tons of money.”

He was talking about expensive both as an attitude and an objective fact. Some of the clothes he showed, like a glossy brown trenchcoat with frilled sleeves, probably ticked both boxes. The irony is that even the items that looked like do-it-yourself experiments will carry a hefty price tag when they hit stores.

Because these days, the sales assistants are trying to sell women the kind of clothes they’re already wearing.