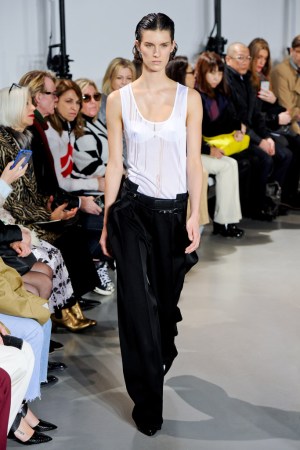 Julien Dossena has put a comfortable distance between his vision for Paco Rabanne and its founder’s, and the collection is all the better for it. The house’s plastic Sci-Fi heritage has all but disappeared in favor of something streamlined and down-to-earth. Further grounding the lineup was Dossena’s priority for fall: “I wanted to go more direct and accessible,” he said backstage. He did that by delivering a spiffy, chic collection, and not for a lack of directional references, many of them Japanese in origin, but also majorly French: Jean Paul Gaultier, specifically the lesser known Gaultier Junior line that launched in the late Eighties and had about a five-year run. The cheeky, sporty secondary line, for which Gaultier once shot a campaign featuring senior citizens modeling his Junior wares, was ahead of its time.

“I’m French, so I was raised with those Gaultier TV shows and his aesthetic of  mainstream mixed with street mixed with couture,” Dossena said. “Mixing references is the modern way and Gaultier was a master.”

The show opened with a light but pert homage to JPG — sheer, distressed white viscose tanks with baby cone bralettes peaking underneath. They were worn with wide-leg mannish pants with folded pleats, worn low on the hips for raw tomboy attitude. More subtle nods to Junior came on satin bombers with Fifties car flame embroideries and low-rise boyish Japanese denim done with neo rockabilly top stitching. Dossena made the ridiculous fantasy of wearing a bedspread believable on lightly padded, zipped duvet skirts. He introduced rich color and exotic pattern with Japanese cherry blossom and tiger prints and embroideries on skirts and dresses in loose, robelike volumes. The sum total was a wearable mix that offered sporty femininity, playful street and comfortable minimalism and a touch of garçonne cool.