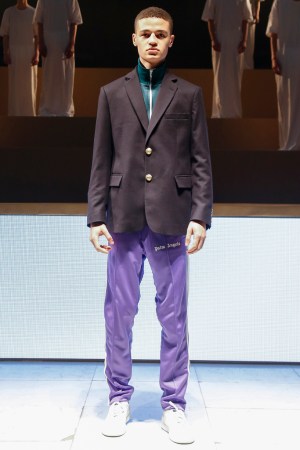 There’s a youth movement happening in Paris and Palm Angels — that moved to the City of Light from Milan to present its fall collection — is certainly part of it.

“I am kind of an outsider here but I like it that way,” said Palm’s 30-year-old founder, Francesco Ragazzi.

Ragazzi — who also art director of Moncler — said he was inspired by Bob Marley’s song “Exodus” that the Jamaican musician wrote in 1976 when he went to London because he was injured following a near-fatal attack. (To make a point, the song served as the soundtrack and the lyrics came with the show’s notes.)

“The message is positive: ‘We’re the generation,’” he said, referring to the lyrics.

The Jamaican flag’s colors appeared in the collection in a subtle way, including on beanies and on the V of a V-neck sweater. So did the brand’s signature marijuana leaf (seen on socks worn with cropped pants).

In Palm Angels’ case, the youth trend is about a glorification of  skate culture. It was best translated into a look consisting in patchwork/camouflage-printed baggy pants paired with a hoodie.

There were also grunge touches, as in a leopard print coat, denim with shredded edges and shearling shoes.

The label is currently available in 160 doors internationally. On having a freestanding store, Ragazzi said: “It would be nice to have but we’re only nine months old.”