Showing for the first time in Paris, designer Julie Paskal played with stylistic clichés hailing from her native Ukraine. 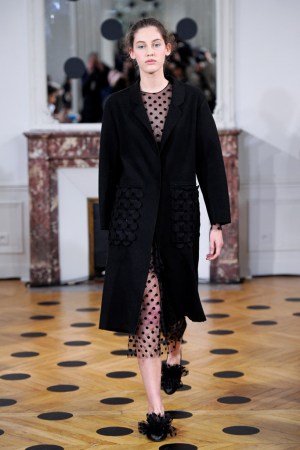 Since being shortlisted for the LVMH Young Fashion Designer Prize in 2014, Paskal has attracted top retailers including Colette, Dover Street Market and Luisa Via Roma, drawn by the Ukrainian label’s playfully engineered yet minimalist approach.

Showing for the first time on the Paris calendar, designer Julie Paskal played with stylistic clichés hailing from her native eastern Europe, notably “flower girls” seen in the streets of Kiev selling their goods out of tiny kiosks. She employed her signature laser-cutting techniques to conjure little blossoms sprouting directly from the surface of girly crepe dresses and overcoats. Polka dots were also central. They appeared on a robe coat featuring the dots as cutouts and puff-sleeved dresses, on which the pattern turned more irregular and resembled animal prints.

Paskal also layered dots on tartan numbers, including a run of folk-inspired apron dresses, which let off the street-chic vibe so popular now. Cellophane-knitted sweaters, meanwhile, meant to hark back at cheap flower wrappings, were of questionable taste and comfort level.