Creative director Alithia Spuri-Zampetti staged an elaborate presentation that celebrated the work of the atelier. 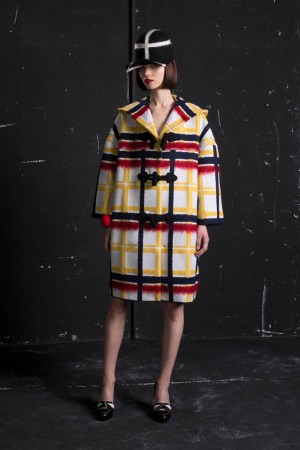 For her first full collection as creative director of Paule Ka, Alithia Spuri-Zampetti staged an elaborate presentation at the Palais de Tokyo that highlighted a little-known facet of the French contemporary brand: Its prototypes are made in-house at its Rue Saint-Honoré headquarters.

The display featured clothes in various stages of completion and the finished outfits — with their clean shapes and exaggerated volumes — were a tribute to the golden age of French couture. A cropped jacket and matching circle skirt in white leather recalled the white calico test garments that are the starting point for each design.

There were cocktail and evening dresses galore, including silk slips and Fifties-style bustier dresses with trompe-l’oeil lace prints. The bow, a house signature, was a recurring element, worked into the back of a jacket or the waist of a dress.

Spuri-Zampetti said the labels on the clothes would start featuring the season — another feature borrowed from luxury, specifically Lanvin, where she had spent six years. “It’s really special that we work like that, and then you can find the products in store at accessible prices,” she said.

Her approach signaled a breath of fresh air at the house, which had been without a designer since the departure of founder and creative director Serge Cajfinger 18 months ago.