Rabih Kayrouz played with clin d’oeil effects and combined textures as different as felt and lamé with ease and sophistication. 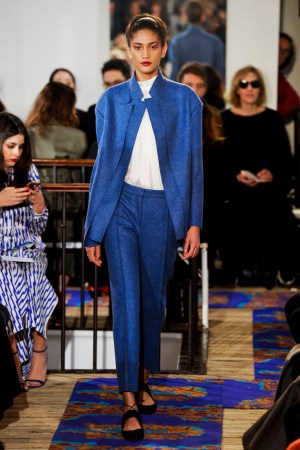 Calling his fall proposal “a journey between dream and reality,” Rabih Kayrouz played with clin d’oeil effects and combined textures as different as felt and lamé all in one look. It was a bold exercise and could have easily gone to riot, but Kayrouz kept things under control. The designer balanced the visual contrasts with ease and sophistication. One floor-grazing dress in flowing black mousseline featured an ascetically cut sleeveless felt coat on its front, giving it enough weight to keep a romantic mood down-to-earth and in day time territory.

Kayrouz repeated the trick on a series of tops with basic men’s shirts protruding from below the neck, which he deliberately left unbuttoned to reveal high-waist pants with legs so wide you could fit two models in one. The exaggerated volumes were alluring in combination with a lightweight lamé fabric from the stock of Abraham, its metallic complexion flickering through the soft movement of a floaty trouser and slightly puff-sleeved tunic top. The looks, nonchalantly styled with a pair of pointy flats, confirmed Kayrouz as a designer in pursuit of chic without any unnecessary stylistic flourishes.