Rahul Mishra’s mixture of Indian handicrafts and contemporary design elements had more of a streetwise feel than his previous offerings. 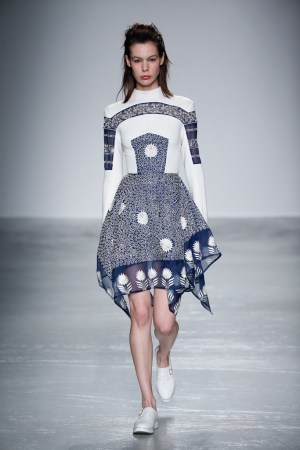 Rahul Mishra’s mixture of Indian handicrafts and contemporary design elements reached a new level of accomplishment in this collection, which had more of a streetwise feel than his previous offerings. The Delhi-based designer, winner of the 2014 International Woolmark Prize, painstakingly dyed his silks using the traditional Bandhani technique, creating a harmonious dot pattern across many designs in a palette of mainly royal blue, black and cream. Only a series of looks in a very pale yellow jarred slightly with the rest.

Intricate embroideries with the motifs of Girih porcelain on Merino wool were graphic and harmonious, and were stronger for being less flamboyant than some of his previous creations. The transparent skirts on several dresses resembled flowing scarves, while embroidered scalloped semi-capes added a translucent over-layer to certain otherwise classic suit jackets.

While bomber and biker jackets have become the new normal in many collections in recent seasons, here, they summarized what was fresh and contemporary about Mishra’s designs this time. This was most apparent in a Bandhani silk and hand-embroidered biker jacket and on combos somehow harmoniously splicing a biker shape up top with handkerchief skirts.