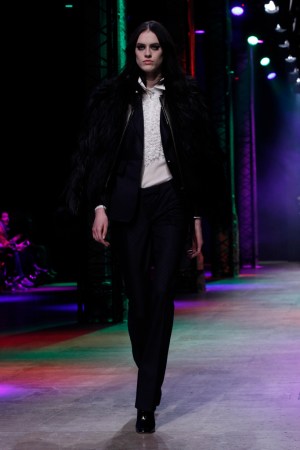 Redemption’s creative director Gabriele “Bebe” Moratti applied the attitude of mods and rockers to a label focused on leather, tailoring, embellishment and sustainability. Cue a trip to Andy Warhol’s Factory, with veteran model Pat Cleveland there to close the show.

“Too many times, we use the subcultures to which we belong to create barriers, rather than to appreciate each others’ cultures,” Moratti mused backstage after the show. “The Factory was a very special place where people from different social backgrounds, creeds, races [and] sexual orientations all gelled together in this magic environment completely devoid of intolerance, and that’s the part we wanted to concentrate on.”

Within that framework, Moratti’s eclectic proposition made sense. The opening tailored pieces — like a bias-cut pantsuit in a Prince of Wales check with shiny black buttons — moved on to A-line dresses, one with a snow leopard effect created with embroidered sequins. Then came the hippies, with fur-edged Afghan-style jackets and over-the-knee boots embroidered with bright flowers.

The tuxedo was worked through the collection — as a long black gown open at the back, for example. Disco fever shimmered throughout, as on a pantsuit with rectangular gems in black and silver forming a diagonal grid pattern, or when sequins formed a Union Jack flag tone-on-tone on a black shift dress.

The glamour quotient reached its height with a long, plunge-necked mesh gown hand stitched with hundreds of gold and silver beads that would have been right at home in a New York nightclub in the Seventies.

Whether Moratti will succeed in getting today’s subcultures to agree on style is debatable, but when it comes to glam with a rock ‘n’ roll edge — and a message on sustainability that is increasingly appealing to today’s consumers (the brand donates 50 percent of its profits to worthy causes) — he is definitely onto something.