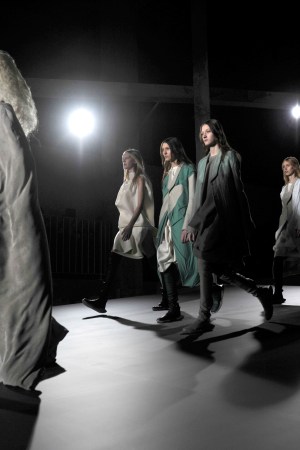 “This can’t be fast fashion because it’s personal handwriting,” he said backstage before his fall show, explaining that the gesture of draping — and he draped every single exit — cannot be imitated. “I’m a niche. I’m in a whole other universe.”

Owens always anoints his men’s and women’s collections with the same moniker — this one is Mastodon — and both sprang from the same ominous evolutionary warning. There were cavewoman airs to the fuzzy mohair whorled into strapless dresses, and the brown puffer carved into a long narrow cape that dragged on the ground. Elephantine pants were a nod to a lost species, and matted hair that engulfed the heads of some models had an apocalyptic edge.

Yet Owens’ drapes — and a host of pretty colors, including cream and an offbeat green he named after French interiors maven Madeleine Castaing — made this an uplifting and affecting display. He opened his show with narrow coats whose sharp lapels were softened by the loose dresses underneath, the folds dribbling like cooling lava.

Those undulating forms repeated on long, bubble-shaped leather skirts and sleeveless tunics. More freewheeling drapes occasionally resulted in dresses with an incredible bulk. But when the volumes were kept above the ribcage, they created an elongated and regal line.

That Owens is something of a designer’s designer was underscored by an unlikely pair in the front row: Donna Karan and Claude Montana, who chatted up a storm, and both confessed an admiration for Owen’s singular approach. “I don’t just like it, I love it,” Karan enthused.