Alessandro Dell'Acqua made an enchanting fabric and color story out of simplified magpie silhouettes for Rochas' fall collection. 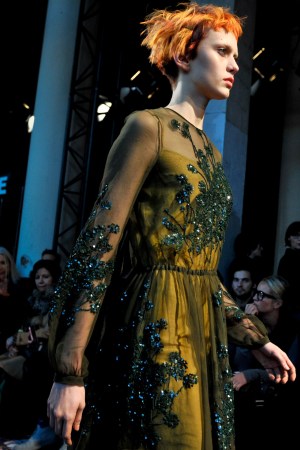 Where did this season’s collective fascination with velvet come from? It’s been everywhere, city after city, an age-old signal of the romantic, the regal, the opulently louche looking fresh again. So it was at Rochas, where Alessandro Dell’Acqua doubled down on his velvet game, embroidering black jackets and skirts in tender winter garden florals and cutting a pair of swanky trousers in macramé bottle green. The return was a beautiful collection.

“Velvet is the new trend, maybe,” Dell’Acqua said backstage. “I don’t know why. Maybe it’s been a long time since there was velvet in the collections.” His treatments were rich yet delicate, all improbably lightweight despite their depth and texture. They brought a moody, dreaminess to the collection, which Dell’Acqua emphasized by making a major fabric and color story out of simplified magpie silhouettes.

Gentle, quirky glamour-pusses came in tie-neck blouses worn under mannish coats, and austere, long-sleeved dresses in lightweight gold brocade or trimmed with messy swirls of ruffles and worn with long trailing neck scarves. Dell’Acqua put together strangely appealing combinations of the sour colors and brights — emerald green and red; tea-stained nude, candy pink and digital blue — working them on slouchy socks worn with chunky heeled, exaggerated platform sandals to amplify the collection’s eclectic nostalgia. It’s tempting to cite the widespread influence of the new Gucci, but Dell’Acqua was pursuing the nerdy, fashion enchantress long before Alessandro Michele got to the party. Rather than move left, when the collective shifts right in his direction, Dell’Acqua held his ground with stylish grace.