In his collection, Bruno Frisoni worked masculine and feminine elements with motifs such as military touches and ruffles. 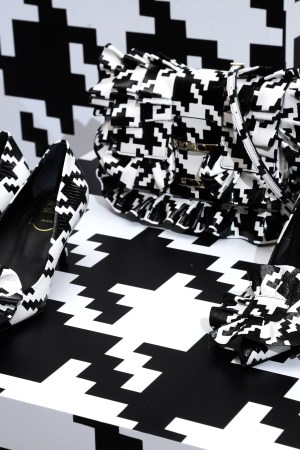 Roger Vivier’s Bruno Frisoni has always had a soft spot for duality of the masculine/feminine sort. Prints associated with each — a black and white houndstooth and chiné silk print, or the blurred flower prints of the Fifties and Sixties — were the basis for shoes and bags that reflected each side.

He worked both elements with motifs such as military touches and ruffles, introduced in the latest Rendezvous collection. The Miss Viv military theme was the message for bags in the masculine vein. An updated version of the house staple featured a thick strap (shaping up to be a trend) that could be worn three ways: on the shoulder, cross-body or in a more novel belt-style.

The ruffle motif appeared everywhere from shoe buckles to the back of heels to a trim on bags for a softer feminine edge. A strong platform sandal and Chelsea boot with a new Sixties-style circle buckle were among the day’s offerings. For evening, the houndstooth and chiné de silk motifs were beaded and sequined on shoes and bags. Other interesting details like leather knots appeared alongside fringe on a delicate evening sandal, while round brass studs, a fresh take for the house, peppered ladylike pumps.

Upon entering the presentation, guests were greeted by a group of undressed mannequins bedecked in bags from head to toe. The reference was to Austrian artist Erwin Wurm, whose artwork juxtaposes the human form with inanimate objects. Frisoni’s point was that the viewer focus on bags, not clothes — contrary to the runway, where clothes are the stars and bags the accompaniments. For the designer, the masculine-feminine juxtaposition extends to the idea of protection and frivolity. His customer, he said, is “armed with softness.”