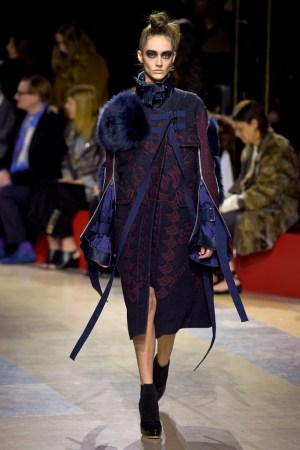 A lot went into Chitose Abe’s fall collection. Such is the status quo at Sacai, where Abe choreographs a suite of references into a humming chorus. This time the show felt more operatic and prone to overstatement. That was partially because the most prominent motif in play was the dark, rococo grandeur of the phrase “love will save the day” interpreted in traditional Japanese calligraphy, and plied with Napoleonic military mixes. The elaborate scroll-like characters were woven into tailored melton wool coats topped with hefty poufs of fur at the collar, shoulder and elbows and aggressively strapped with belts.

A rich palette of Bordeaux, purple and black, navy and orange, and marigold and green amplified the effusive rock romance on silhouettes that proposed new proportions but got a bit out of hand. There were great shearling coats with banded elbows and strapped wrists, wide fluid pants with military belts cinched around the thighs and low-rider skater shorts that zipped up the front of the leg. At times they had to be excavated from under layers of coats, bombers and the flapping belts and straps, which were key to the new shapes, but could have been used more sparingly.

Tailored men’s coats with exaggerated fluted sleeves, a shrunken leather bomber and a puffer jacket and novelty knits with bell sleeves and psychedelic heart patterns were among the most wearable pieces, items you could pick out in a strong look that at times overpowered.