Presenting in an intimate one-on-one appointment, Wauchob revealed that she would also test the see-now-buy-now waters with a few “signature pieces.” 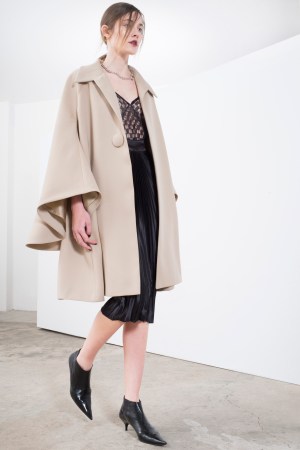 Bidding adieu to Paris, where she has worked since graduating from Central Saint Martins more than 20 years ago, Sharon Wauchob is relocating her studio and family to London in the coming weeks, where she says she is eager to catch a drift of the city’s “youth and positivity.”

The move made the Irish designer instinctively look to her own past for fall.

The Nineties were the most obvious reference, a period  “tough with elements of punk, street and deconstruction but still precious and fragile,” as she noted, though Wauchob tamed her enthusiasm for the era with a contemporary approach to fabric which, when mixed with sharp tailoring, resulted in an exchange between soft and hard throughout.

To wit: Masculine coats and capes got softened by artsy lace embroideries, cozy fur details or side slits, which only then revealed the delicate lace tops underneath, while boyish pleated pants channeled a soft, feminine vibe when done in ultralight wool or jacquard.

As for her signature lace, Wauchob cut its floral patterns into bands and stitched them back together for a chain-mail effect, which looked modern on body-conscious dresses, or she pleated the fabric, which in one instance made it look like tweed, a technique she said she would like to explore further.

Presenting in one-on-one appointments (the designer is slated to revert back to fashion-show mode once her slot on the London fashion calendar has been confirmed for September), Wauchob revealed that she would also test the see-now, buy-now waters with a few “signature pieces,” though she was quick to add that she did not wish to change the format entirely, as it would affect quality. “A new lace takes three to four months to develop, which is longer than a season,” she said, adding: “If you take shortcuts it shows.”