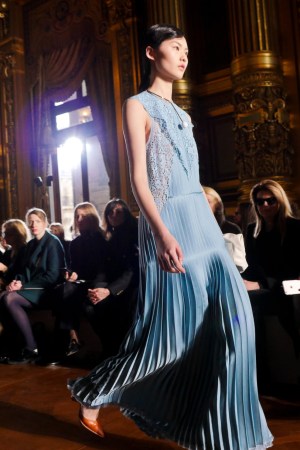 The woman knows how to do wardrobe. Stella McCartney has made the creation of practical chic her professional defining purpose, one long telegraphed on her runway. From her, the approach feels genuine rather than please-the-suits trendy. For fall, McCartney’s press notes lauded “signature Stella,” and so it was, rooted in her feminine/masculine discourse. Yet McCartney delivered her wardrobe message via fashion that was bold to the point of challenging. It played like fresh air wafting through a too-clinical season — fresh air with imagination and high style.

Ever secure in who she is — and not above expressing that as shtick — McCartney’s soundtrack included not only the exclusive debut of M.I.A.’s “Ola,” but also a lunchroom ditty called “Get Yo’ Tofu On” by Snaxx. Among its snappy lyrics: “Do you only eat kale?” “You just look like a wannabe hippie.” “B—h, I’m vegan.”

Wannabe-hippie vegans or otherwise, McCartney’s girls looked great. Her biggest message was one of proportion — ample in both width and length. She opened and closed with luxed-up, velvet parkas (feather-free, the show notes advised,) the first in rich copper cut to the thigh and the last, deep blue and long. These were worn over pleats, a recurring theme, in languid evening dresses and daring trousers. The puffery continued in numerous variations, including short bombers worn over a jacket and coat.

Save for a pair of puffa shorts, McCartney kept everything long. A modern romantic lingerie story featured body-skimming slipdresses in collages of silk metallics and lace, and camisoles cut with ease over pleated skirts. More demonstrative volume came elsewhere — the wide fluid pants and a series of fabulous, fluid dresses with ruffled yokes that looked like a nightgown and a caftan got married.

It all made for a hybrid of chic with charm — including the collection’s wittiest touch — a recurring swan print. It worked swimmingly.