Thomas Tait's collection of exquisite pieces done with rare, small details was presented in a simple gallery setting, all the better to appreciate the little things. 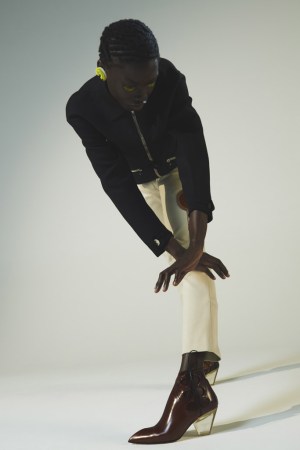 Thomas Tait’s clear-headed, intelligent explanation of why he chose to present his fall collection on a single rail in a Paris gallery instead of on the runway in London offered a glimmer of reassurance that someone in this season of questioning the system has a grip. “Not doing a show and doing a presentation gave me a certain sense of responsibility to make sure that the pieces are all exquisite and captivating in small ways, things you wouldn’t register on a catwalk or even online,” said Tait. “It’s sort of forcing people to get closer to the clothes to understand what’s going on.”

He didn’t have to force anything — the clothes drew you in.

The simple, spare setting put all the attention on what was hanging on the rack: special pieces, beautifully considered and crafted. The fabrics were superb and the little details made a big impact. Tait worked in rich navy and white silk satin, lightly padding coats with goose down and tracing them in raw hatch-mark stitching, directly cribbed from Tim Burton’s “Batman Returns” Catwoman costume. “I’m a big fan of Michelle Pfeiffer in that Latex catsuit,” he said.

Not at all severe, the look was gentle, and lovingly handcrafted. There were definite Japanese overtones in the luster of the silks, the prints based on Tait’s technical sketches of the collection, the stitch work and extraordinary boro denim pieces. But there were also traces of the Seventies and Arts and Crafts in the droopy flared cut and color of double-face cashmere pants that were brown on one side of the leg; black on the other, the intricate smocking on a silk shirt, the crystal beads used as buttons and Tait’s faint version of branding — the letter T roughly scratched on buttons.

Thinking about individual items instead of entire looks meant for the runway had a liberating effect. “I did worry at the beginning that it would end up not looking like a collection,” said Tait. “But being able to look at things much closer allowed me to connect the dots between all the pieces.” It was a rare connection, indeed.