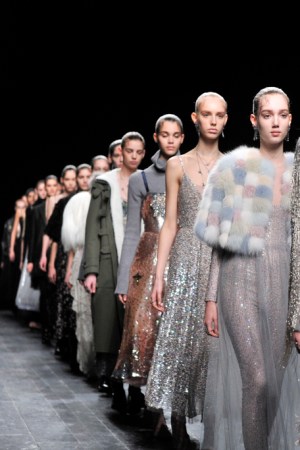 Brava! Bellissima! Encore, please, and not just of the clothes in Maria Grazia Chiuri and Pierpaolo Piccioli’s stunningly graceful fall collection for Valentino. Give us more of their fashion philosophy. In a season stuck in the cynical funk of see-now-buy-now, to hear the designers clarify their motivation behind their show, and their careers in general, was music to the ears.

“Everybody is speaking about ‘see and buy,’” said Chiuri backstage. “We think that to be in the moment is more important. You can see and you can feel as well. You can also buy, but it is not true that fashion is only to buy.” She and Piccioli are of the mind that there’s an intangible pricelessness to the shared show experience as we know it, creating something that sparks emotion in its witnesses — the buyers, the press, and the countless others who devote their precious time to the process — making them eager to share what they saw and felt. Spread the good word. It’s an old-fashioned, biblical concept.

In defense of their defense of the traditional system, Chiuri and Piccioli are on the short list of designers capable of delivering such a level of stirring work. They did so for fall, drawing on the “Happening” performance art movement of the Fifties and Sixties and the value it placed on viewer participation and the concept of the ephemeral, as well as further exploration of the dance motifs tested in the spring couture collection.

The show was different on two levels. Instead of a recorded soundtrack, pianist Vanessa Wagner played works by John Cage and Phillip Glass on a baby grand Yamaha positioned, Happening-style, in the middle of the audience. More significantly, the collection’s gentle expressions of classic dancer attire substantially broke the mold of the regal high-neck, long-sleeve dress silhouette that Chiuri and Piccioli have plied consistently and successfully over the past few years.

The tony street-goth tone of the tailored navy and black double-breasted coats over matching ribbed-knit turtlenecks, ankle-length tulle skirts and combat boots that opened the show came as a surprise — a great one. Dancers off-duty came in moody layers of mannish outerwear over long skirts, and modernist jersey dresses with spaghetti straps that laced in back over collar bone-framing ballerina shirts, as Chiuri and Piccioli intuited the styles of Karole Armitage and Martha Graham into gorgeous day- and eveningwear. There were moments of austerity, dark and sober in a plain black tutu dress over a black turtleneck and leggings; and light and fluid in earthy, draped jersey dresses that fell in soft, clingy pleats around the body. And there were notes of romantic decoration, via graphic triangle and circle embroideries and prints that referenced costumes from the Ballets Russes.

The variety was amazing. A gold velvet dress with a flounced top and a long ribbon belt wrapped around the waist worn over a blush turtleneck exuded the charming shyness of an understudy. A silver-fringed sweater and gold-fringed skirt had the seasoned glamour of a ballet master. There were bad-girl black swans in tulle, leather and witchy gold-star embroideries, and ingenues in the breathless finale of transparent, tea-stained tulle dresses decorated with fluttered ruffles, a sweetheart-shaped bodice and twinkly stardust.

Then it was over. A 20-minute dream that was purely evanescent for most of the people in the audience. But that’s OK. “If everything is approachable, it’s not magic,” said Piccioli. “It’s just clothes.”