Two years after creating costumes to Michel Legrand’s musical “The Umbrellas of Cherbourg,” Vanessa Seward returned to the Théâtre du Châtelet with an alluring collection for her label. 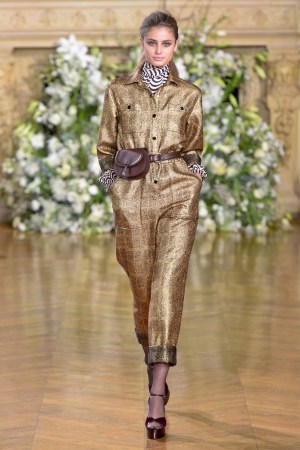 Two years after creating the costumes for Michel Legrand’s musical “The Umbrellas of Cherbourg,” Vanessa Seward returned to the Théâtre du Châtelet with an alluring collection for her namesake label. Just don’t get fooled by the venue: this was a perfectly un-theatrical show catering to real life.

While the opening number, a gold lamé jumpsuit with cropped pant legs and big cuffs, was flashy, she settled into solid workday versions of the same silhouette in light corduroy.

Throughout, the designer imagined a woman secure in her femininity. High-waist culottes matched with delicately printed high-neck blouses, let off a sexy, retro-tinged air. Coats were long, lean and soft – and occasionally worn as a dress — in rich terra-cotta suede or pale shearling, while raw denim returned to the stage in the shape of a shirt jacket and three-quarter rolled-up jeans, which Seward styled with a glittery bandanna flying off as a long scarf.

As for evening options, the designer reworked “le smoking,” a French invention, as a coatdress, a kimono-wrap number — also with culottes in lieu of trousers. Long and loose lurex dresses were accessorized with mini belt bags.

The collection was beautiful and totally uncomplicated.

“Do that thing, that thing that you do, Vanessa,” whispered the breezy soundtrack, produced by the designer’s husband Bertrand Burgalat in collaboration with Mick Harvey and Anita Lane.