Models had the look of time-traveling Elizabethan heroines. 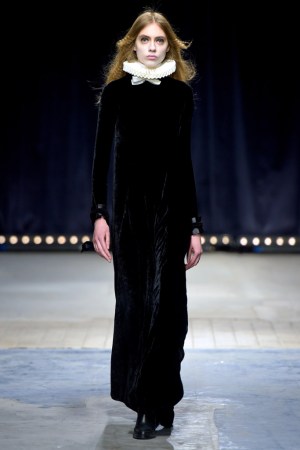 Veronique Branquinho opened her show with a powerful statement in velvet, fast becoming the season’s ubiquitous material. Rather than exploit the seductive potential of the fabric, she tapped into its historical connotations by pairing stark black gowns with white ruff collars.

Other dresses followed in black materials with glistening or matte textures. Some featured hoods that gave the models the look of time-traveling Elizabethan heroines, down to their powdered white complexions and crimped hair.

Those masculine touches, along with voluminous pants with paper-bag waists, nudged the looks out of costume territory. Some of the floor-length dresses also came in more practical iterations: chic midi dresses and skirts were worn with knee-high leather boots and a boyfriend jacket for a skewed take on Seventies preppy chic.