Everything that launched Vetements into fashion's insular stratosphere was on the runway for fall, expanded and upscaled. 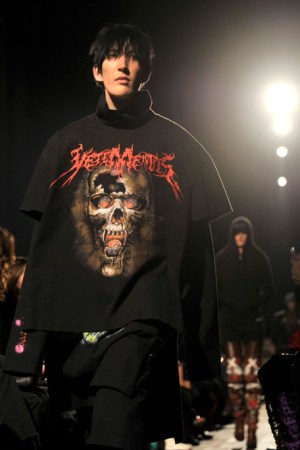 The guests at Vetements’ fall show sat in pews at the American Cathedral of the Holy Trinity in Paris, many of them holding a single (fake) red rose, the kind of flower that might be issued to mourners at a funeral. In this case, the roses were the invitation to the show, and there was no casket. The only thing that died was a degree of the raw, uncertain, almost innocent cool factor that launched Vetements into fashion’s insular stratosphere at turbo speed. Say goodbye to your childhood, Vetements — you’ve graduated to the brand-building portion of your lifespan.

Opening the show with warped schoolboy and girl uniforms was a bit on-the-nose for the church setting. Oversize blazers and oxfords cut short on one side, longer and pleated on the other, were worn over plaid minis, with extra-long neckties, tied backward and nooselike, as scarves. But the look introduced strong tailoring, including plaid suits with slouchy bottoms and hunched shoulders. There were beautiful trenches, pretty-but-weird micropleated dresses and shirts in polka dots and tartan and — trend alert! — velvet coats.

The collection’s demented bourgeois beginning belied a progression toward the punky and fetishistic, which appears to be Gvasalia’s strong suit. The stuff that’s been so influential for the label — the cut-up vintage jeans that are ubiquitous in the front row; the sweatshirts with ironic slogans; the stocking boots with cigarette-lighter heels — retained its cheapo cool. A black T-shirt-and-hoodie combo was printed with “justin 4ever.” A shrunken eggplant hoodie was worn over a maxi sweat-skirt printed with “sexual fantasies.” Exaggerated street-thug gear featured satanic worship symbols. Blue-collar butch Windbreakers bore Vetements’ logo. The baggy, thigh-high wader boots came painted with crude guns-and-roses motifs. Perhaps the collection’s street side was a little more sinister than past seasons’ in the emphasis on death metal and black and red, but it was an innocuous sinister. How many devout Satanists shop at Dover Street Market?