Goga Ashkenazi paraded a collection inspired by her passion for music - and for Vionnet's rich archives. 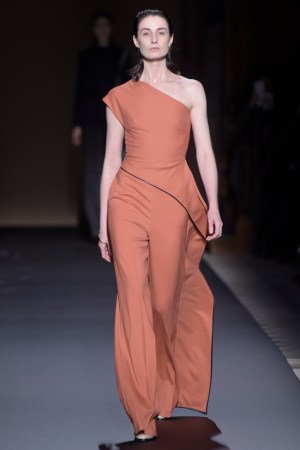 Goga Ashkenazi has been playing classical piano since age six and finds beauty in the inner workings of her Steinway grand – its strings, hammers and tuning pins. “Every Steinway has a soul,” she enthused backstage after parading a collection inspired by her passion for music — and for Vionnet.

In the midst of digitizing the house archive, Ashkenazi settled on a 1932 collection, rich enough in geometric lines and embroideries “to inspire 10,000 collections,” she asserted.

She and her design team did a respectable job transporting elements of musical instruments and Vionnet wizardry into the fall collection, which included some of the best gowns yet from this heritage brand, resurrected in 2006 and so far charting a choppy road to reinvention.

Vionnet will forever be associated with liquid draping and ethereal femininity and here were some ravishing examples in satin printed with photos of the French countryside, or sky-blue jersey and chiffon anchored to the torso with harnesses. The black and white columns that opened the show, one with panels strung from a necklace like piano keys, were striking in their graphic simplicity. So were pleated numbers in the fabric of the season — Lurex knit — some with athletic bodices or plunging necklines. Backstage, Ashkenazi said those are the ones all the models wanted. “So easy and comfortable,” she said.

To be sure, the musical references did not always translate into harmonious fashions — notably pleated leather sections anchored to the bosom like accordions. But better a surplus of ideas than a one-note collection. Backstage, fashion maverick Hussein Chalayan, who had collaborated with Ashkenazi for a nano-second on semi-couture, gave her a smooch and big thumbs up.