Yohji Yamamoto's "subtraction" approach to his fall collection was rooted in simplified sexiness. 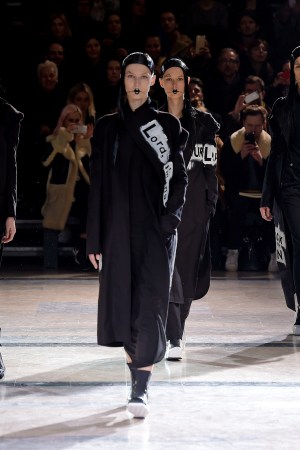 “Subtraction.” At first, Yohji Yamamoto’s single-word response to the obvious post-show question — “What’s it all about?” — left inquiring minds hanging. Then, after a mental review of the collection, with its lean, gentle cuts and measured approach to patternmaking acrobatics, one realized it was Yamamoto in modern minimalist mode. He didn’t add on without purpose and less was indeed more.

The opening looks were spare but not plain, a series of languid black dresses and coats with narrow plunging V necklines under tailored jackets with sleeves cut to look dropped off the shoulder. Nothing was superfluous, but the look was not as simplistic as basic arithmetic. Yamamoto was making a subtle statement on sexiness.

An undone attitude and a peek of flesh came through in way of a fitted shirt, worn with pants that folded down at the fly, was casually buttoned. Small and silver, the buttons recurred on Henley-like shirts and around the hips of black pants in a pattern that evoked sailor uniforms, a reference made clear on jackets with square sailor collars and a group of fantastic knit dresses — black with a raw trail of red stitching; white with a crude black stitching — that were clearly nautically minded. The dresses hinted at the female form without coming close to the body. Asked about the sea-faring motifs, Yamamoto reached for a fetishistic cliché. “The sailor collar is a teenager’s uniform,” he said. “They’re always sexy.”

However that statement sounded, there was nothing “pervy” about the clothes. The opposite. They felt current and, by Yamamoto’s standards,  feminine. (He noted backstage that he prefers women in mannish looks.) His sideways approach to subtraction and sensuality was effective and quite blunt in the end. The finale featured black coats with white brushstrokes printed with intriguing phrases that summoned poetic longing, despair and commitment — “Lord, I’m not happy here”; “Stop me before I f–k again”; “I will be back soon.”

“I wanted to create something very simple,” Yamamoto said of the messages. “It came from inside.”