In what was widely believed to be his last show for Saint Laurent, Hedi Slimane showed a collection that played like petulant parody. 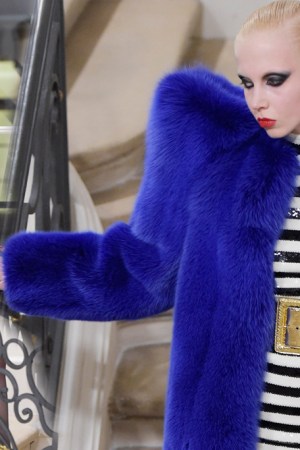 It must have been parody — as in giant middle-finger parody. “Hey,” Hedi Slimane said with every look, “you who didn’t love my indie-druggie-grungy-disaffected L.A. youth routine these past four years. How ’bout Eighties camp couture?” At 8 p.m., 28 days into a grueling, few-thrills 30-day season, the parody didn’t play nicely.

In what was widely believed to be his last show for Saint Laurent, Slimane took up, in a manner of speaking, where he left off in Los Angeles, when he showed part one of his women’s fall collection along with his men’s wear in an extravaganza at the Hollywood Palladium. Then, he departed from his indie-rocker ways in homage to the 50th anniversary of Rive Gauche, going archival by day with clothes that worked a late-Seventies mood. In pictures at least, they looked sensual and quite chic. For part two, he switched over to archival by night.

First, Slimane and the house of Saint Laurent set the mood. Rather than a cool art booklet for an invitation, they sent exquisitely engraved cards, each with the guest’s name in calligraphy. Rather than a huge, cool dump of a show space installed with an elaborate high-tech set and bench seating, he showed in the dazzling, just-renovated 17-century mansion he selected as the brand’s new couture house (yes, couture house) on ballroom chairs painted black, each bearing a plaque engraved with the name of a guest. And rather than specially commissioned indie music, the models walked to no music, only the voice of a woman announcing look numbers in French and English. Before that happened, Pierre Bergé escorted Betty Catroux in, just like old times.

Back to archival by night. Slimane went late Eighties, by which time Yves Saint Laurent was well past his creative prime and influence. After opening with a smoking with a froth-collared blouse, he inserted a fuchsia catsuit here, a Morticia gown there, and some of his strong, sells-like-hotcakes tailoring. Starstruck motorcycle jacket, anyone? But mostly, Slimane explored a single period-piece item — the cocktail shaker — in all its shortest, tightest, tackiest glory, with a subtext. Make that two subtexts. Which pop star will get first dibs for a music video? Answer: Unknown. And just how silly can a shoulder treatment get? Answer: Pretty silly.

If parody, it was just plain rude. If Slimane was serious, this is reason number 731 why the show system needs an overhaul.