With this selection for fall, Cecilia Bönström channeled a mix of urban classics with more romantic silhouettes and prints. 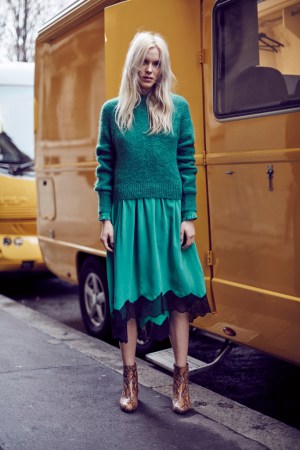 For the first time, Zadig & Voltaire chose to separate its collections into four seasonal offerings and give a new rhythm to store arrivals (Its fall collection, revealed in February, will be in boutiques beginning in June, whereas this collection, labeled winter, will arrive later).

With this selection, Cecilia Bönström paid tribute to Juliette Binoche’s character in the Nineties movie “The Lovers on the Bridge,” channeling a mix of urban classics with more romantic silhouettes and prints.

A pair of baggy black leather overalls was paired with a cream silk blouse with lace shoulders. Neoprene sweatshirts had military stripes, while ethereal dresses and blouses had a floral print dominated by red and black reminiscent of the Sixties, or were worked in bright green silk. There was also plenty of chunky knitwear worked with a grungy vibe. Pantsuits — one of the label’s references — were given a touch of glamour with gold jacquard motifs.

The presentation took place in the ground floor space of what is to become Zadig’s new headquarters in a couple of months’ time at 11 Avenue d’Iéna, leaving room for its current home on Rue Saint Roch to be converted into a hotel, its second in the French capital.