The show was titled “Dark Night Dreams,” and Keita Maruyama’s collection drew inspiration from the elements of the evening sky. 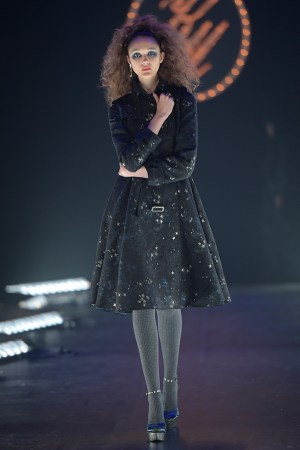 Titled “Dark Night Dreams,” Keita Maruyama’s collection drew inspiration from the evening sky. A stiff jacquard with silver stars woven into it formed the basis of a trenchcoat, nipped-waist jacket, wide pants and a full skirt. A constellation print found its way onto a bow-tied blouse and layered, flouncy dresses. And a fringed miniskirt and poncho-like top were covered in metallic star appliqués.

Maruyama also seemed under the influence of Forties-style high-glamour, with fur muffs and shrugs, veiled hats and figure-hugging jackets all making an appearance. Fur stoles and clutches with embroidered cat faces had a playfulness that contrasted with the sexier looks, such as a polka dot mesh dress and a skirt over HotPants, and a strapless pencil dress.

But Maruyama never strayed far from the nocturnal theme, which also manifested itself via a series of satin robes and pajama styles with Chinese embroidery. These proved too sweet a dream: The Easter egg pastels and dragon motifs felt out of place with the mostly dark collection of blacks and midnight blues.

However, Gwen Stefani seemed to love it all, and was happy to sing the show’s praises when speaking to the press afterwards.  “I’m such a huge fan of Japan, and of fashion, and of this guy,” she said. “So I just feel like I’m in a dream right now.”